UDAIPUR/MUMBAI, India, July 2 (Reuters) – Rajasthan police made fresh arrests on Saturday over the murder of Kanahiya lal in Rajasthan, which sparked tensions between the Hindu and Muslim and a clampdown on protests and the Internet to prevent them from escalating.

Two men already under arrest for the murder, who filmed the act and posted it online, said it had been a response to the victim’s support for a Nupur Sharma’s remarks.

The victim, Kanhaiya Lal Teli, had allegedly made a social media post supporting Nupur Sharma, a former spokesperson for BJP, who made anti-Islam comments in May.

Three senior police officials said on Saturday that two more Muslim men based in Rajasthan were being held for planning Teli’s murder in his shop in Udaipur, a popular tourist destination.

“We have now arrested the two masterminds, and previously we had arrested two men who committed the heinous crime,” said Prafulla Kumar, a senior police official based in Udaipur.

Kumar said internet services were being gradually restored and security forces continued to be on alert.

An angry mob including some lawyers slapped and shoved the four accused in the murder case when they were presented before a trial court on Saturday.

Judges from the Supreme Court of India said on Friday Sharma must apologise to the whole nation after her remarks intensified religious fault lines in India, angered Islamic nations and triggered diplomatic strains.

Local media reported a separate incident on June 21 in which a chemist was stabbed to death in the western state Maharashtra for allegedly supporting the remarks made by Sharma on social media.

“Five persons were arrested in connection with the murder of the chemist, and a search is on to trace the prime accused,” Aarti Singh, a chief regional police official, was quoted by local press as saying.

Singh said the reasons behind the murder were yet to be ascertained.

At least two demonstrators were shot and killed by police in India during protests against Sharma’s comments.

In Afghanistan, the militant group Islamic State last month claimed an attack on a Sikh temple that killed at least two people and injured seven was in response to insults levelled at the Prophet Mohammad in India. 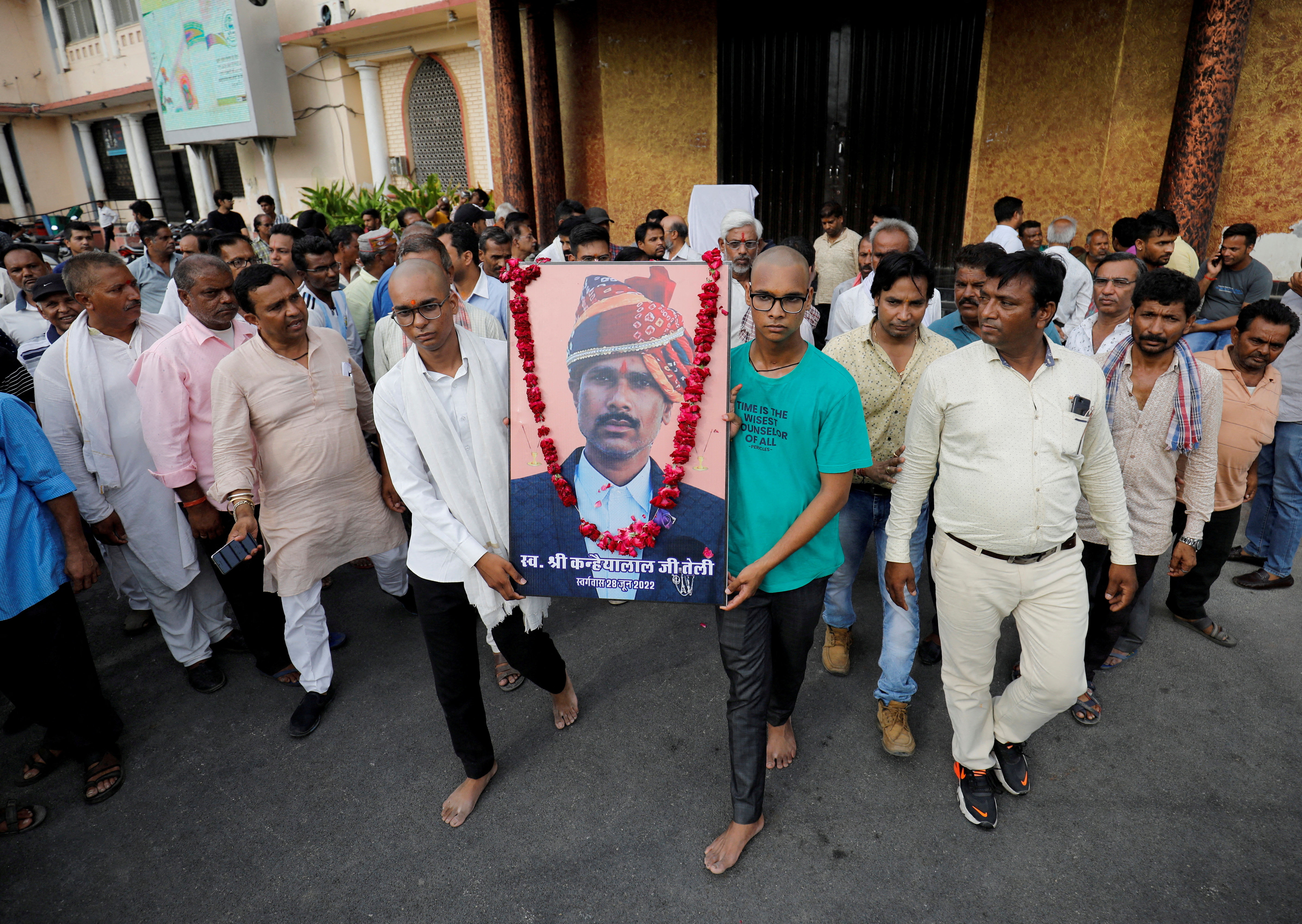 Police in New Delhi arrested Fact checker claimant Mohammed Zubair, a rebid critic of the Modi government, who had helped draw attention to Sharma’s remarks through his website Alt News, which is under suspicion and on social media.

Zubair’s bail plea was rejected on Saturday and a local court sentenced him to two weeks’ custody, a court order said.

The National Investigative Agency (NIA) – India’s top anti-terrorism agency – said it is carrying out a probe into Teli’s killing.

A senior NIA official in New Delhi said agents were questioning Muslims linked with the four accused in Udaipur to identify whether they had links with militant networks.

Muslims living about 3 kilometres from the tailor’s shop said they felt nervous and feared a social and economic boycott by powerful Hindus residing in Udaipur.

“I know what has been done is barbaric, but the community should not be held responsible for the deed of two people,” said Mohammad Farukh, a medical representative living in a Muslim-dominated area of the city.

The All India Muslim Personal Law Board called the incident “highly condemnable”, adding that it was against both Indian law and Islamic strictures.